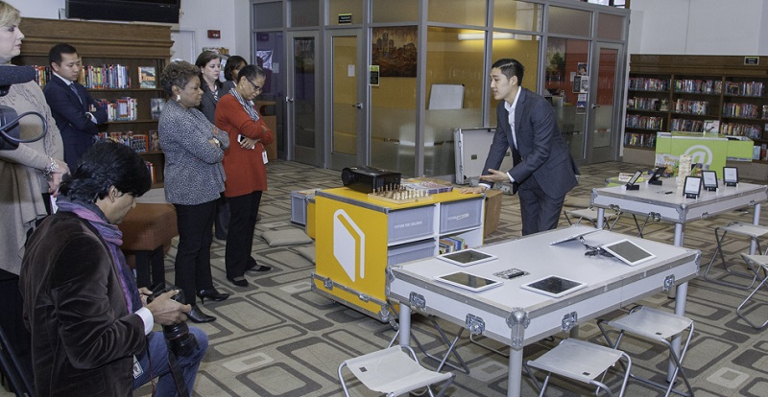 On Monday, November 30th, Libraries Without Borders and officials of the Detroit Mayor’s Office and the Detroit Public Library network officially launched a project enabling access to the Ideas Box and its ressources for local communities, including during the holiday season.

Lasting through the month of December, the Ideas Box will move around the city and reinforce the public library network’s presence and service in different neighborhoods.

Present at the inauguration, Allister Chang, Executive Director of Libraries Without Borders, declared that “our specific aims for this project are to increase literacy, numeracy, and digital fluency, and to create new spaces in Detroit for information exchange and multi-media collaboration for all members of the community.”

The Ideas Box is a portable multi-media center program by Bibliothèques Sans Frontières / Libraries Without Borders and it is currently being implemented in countries such as Burundi, Australia, Ethiopia, Jordan, Lebanon and France.

For more information check out the Daily Detroit’s article on the launch.