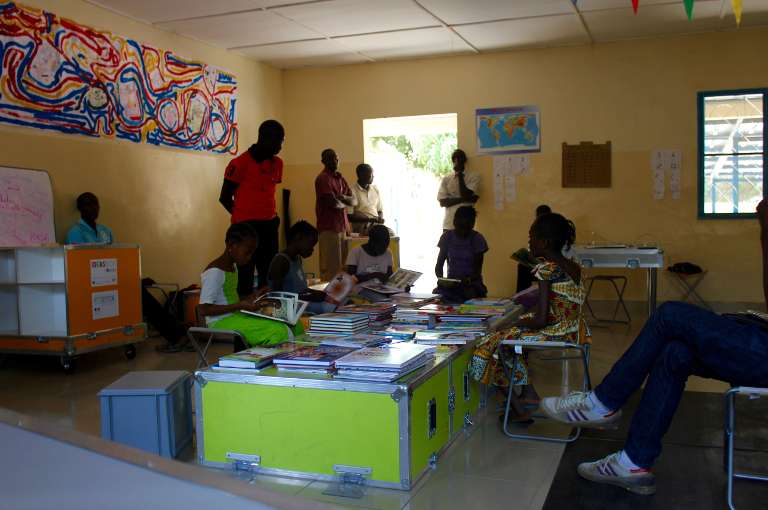 Homeless Youth in Senegal Find Solace in the Ideas Box

For the past two years, Future to Present and Libraries Without Borders have been working together to improve access to education for homeless and exploited youth in Ziguinchor, a city located in the south of Senegal. Seyni Diedhiou has been with Future to Present since 2012. Before working with our team, Diedhiou was an educator at an emergency accommodation center, where he was responsible for supporting vulnerable children in domestic disputes and foster care. For almost a year, Diedhiou has overseen the Ideas Box program in Ziguinchor.

Due to its geographical isolation and poor infrastructure, the Casamance region of southern Senegal is one of the poorest areas in the country. In fact, because of extreme poverty and growing instability, rural families often move to, Ziguinchor, the largest city in the region, to search of work.

In Ziguinchor, a city of roughly 200,000 people, is common for children to dropout of school in order to support themselves and their families. These children stand at the front lines of poverty. Many lack the educational and emotional resources to cope with everyday life, which prompts them to leave home and live on the streets.

“Some girls, called the little shop girls, wake up very early to sell mangoes, peanuts, and other kinds of fruit in the street. They are often exposed to many dangers such as abuse or rape. It’s a common phenomenon in Ziguinchor! ” says Diedhiou.

According to the Senegalese government, 35 percent of children under the age of fifteen are working. While child labor affects both boys and girls, young female workers are particularly vulnerable, especially if they serve as domestic workers. Fewer people know about the plight of these so-called ‘little maids.’ As the lesser known face of child labor, they are often afforded fewer protections.

FUTURE TO PRESENT: A PARTNERSHIP TO INCREASE ACCESS TO EDUCATION FOR HOMELESS YOUTH

Future to Present is an international organization founded in 2012. To date, the organization has focused on reducing inequalities and poverty, especially among street children. Given the organization’s experiences with homeless children, Future to Present had observed that many suffered from psychosocial disorders. As a result, their work has focused on helping homeless children get off the streets and work toward a brighter future.

In January 2016, Libraries Without Borders partnered with Future to Present to bring the Ideas Box to Ziguinchor. Because of its dynamic nature, the Ideas Box was an ideal tool for supporting Ziguinchor’s homeless youth. First, it could provide a safe space where children could access the psychosocial support needed to heal from any trauma they had experienced on the streets, including rape, incest and other forms of abuse. Second, it could serve as a learning hub for homeless children, many of whom had little to no formal education—enabling them to gain new skills for the future.

Through the Ideas Box, Libraries Without Borders provided the hardware—the tables, chairs, laptops, books, and technological equipment (e.g. cameras, recorders, projectors)— needed to create a safe learning space. We also leveraged the experience of our education team to provide guidance on curriculum development and content curation. By collaborating with local teachers and Future to Present staff, we co-designed a curriculum customized to meet local realities. This included coursework on introductory French, entrepreneurship, and prominent figures in Senegalese history. All content was available in French, Wolof, Manding, Diola and Fulani.

In addition to hardware, content curation and educational support, Libraries Without Borders also trained Future to Present staff and local teachers on facilitation techniques and monitoring and evaluation best practices. By participating in these trainings, we also improved the overall digital literacy of all participants.

Ultimately, the Ideas Box provided homeless youth with life-saving resources and gave local children access to a variety of educational and cultural enrichment opportunities, including sports, dance and digital literacy classes. It also offered programming for formerly incarcerated youth, which was aimed at facilitating their reintegration into society by helping them register for school or obtain vocational training. Lastly, it served as primary care center for children who might not otherwise be able to afford a doctor.

Over the course of 18 months, Future to Present and Libraries Without Borders ran nearly 700 programs through the Ideas Box! This included theatre, rap, dance, math, and grammar workshops. It also included informal learning opportunities through board games and screenings of films, which often elicited debates on a range of issues—from hygiene to children’s rights!

The tools, content and programming made available by the Ideas Box enhanced the quality of life for many children in Ziguinchor. Thanks to the Ideas Box and its volunteers, the city’s most vulnerable children were able to take advantage of educational resources, psychological support and cultural enrichment opportunities. Moreover, because of its mobility, the Ideas Box could also travel to the most remote neighborhoods in Ziguinchor, including places that lacked electricity, internet and in some cases, even schools.

“Between November 2016 and July 2017, the Ideas Box has also been transported to two schools located around Ziguinchor Matam school Dième and Diaby school. FAP has accompanied the teachers in the implementation of the Ideas Box activities in classes divided into two, with about 70 students.

From November 2016 to July 2017, the Ideas Box was set-up in two public schools in Ziguinchor. Here, the Ideas Box was able to reach even more vulnerable children, including a young girl named Anne-Marie. When she first came to the Ideas Box, Anne-Marie could neither read nor write. However, by exploring the library of books and digital tools within the Ideas Box, she discovered a passion for reading and writing. Today, Anne-Marie is a self-assured, high-achieving student who has taken on a leadership role in her school.