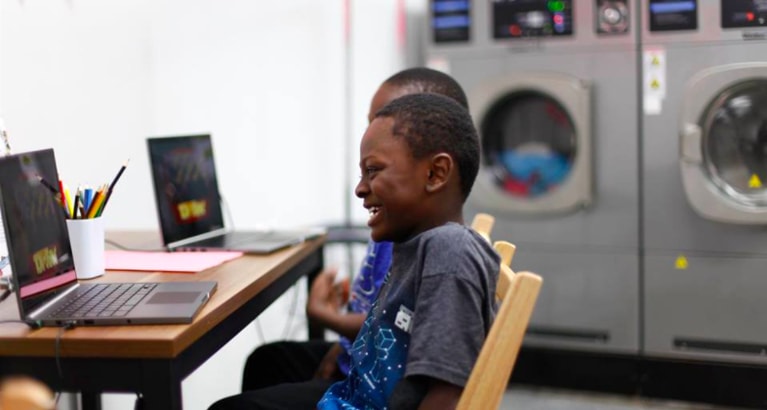 In Detroit, Libraries on the Ruins of the American Dream

We know Detroit, the Michigan metropolis, for the former glory of its automobile industry, its violent 1967 riots, Eminem, RoboCop and its abandoned pavilions, ruins of an American dream. It’s lesser known that in Detroit, there are physical and digital libraries in several city laundromats, offering the poorest populations the opportunity to read and inform themselves, to the drum of washing machines.

Libraries in street corners, in parks and subway stations. Why not in laundromats? This story didn’t start in Detroit, but in the district of Morrisania, one of the poorest of the Bronx, New York. Bibliotheques Sans Frontieres joined with Dream Yard and the Laundry Cares foundation to launch the summer program Wash and Learn, allowing inhabitants to draft their CV and apply to jobs online.

“In parks, nature can play against you. If it rains, there’s no one. If it’s nice out, it’s impossible to read your computer screen. Regarding train stations and street corners, they are less favorable for people to stay, who are usually in a rush. However, in laundromats, people have the time and are looking for something to do,” explains Allister Chang, Director of Libraries Without Borders in the United States.

Last summer, it was Detroit’s turn, known to be one of the poorest cities in the United States, to welcome Wash & Learn. The pilot project was the following: three laundromats were equipped with a KoomBook, a digital library allowing inhabitants to access a certain number of books and educational content for all ages, selected in partnership with the Detroit public library.

“The content of the KoomBook offers responses to specific questions asked by members of the community: How to fill out my tax forms? What is the TVA? How do I create an email? Download a CV? How do I sign up for health insurance? What activities can I do with my children, once at home, to help them succeed in school,” continues Allister.

All day, the same profiles take turns at the laundromat: unemployed adults and very young children.

“The neighborhood has a hard time making ends meet. The surrounding blocks are inhabited by families who have been fighting for years. In the building next door, many don’t have Internet or even a computer. For some, it’s even financially difficult to come to the laundromat. Nevertheless not preventing the children from going around. Many have never even stepped foot in a public library. Before they were getting bored around the neighborhood. Now, they read and use computers,” Justin Johanon explained last summer, leading the Fit and Fold laundromat.

From May to September, local partners take turns in order to host the KoomBook: instructors even come regularly to accompany youth in small groups, particularly for homework help.

“The enthusiasm of laundromat managers and that of its employees was impressive! A mix of pride and excitement! They brought the children to computers, ensuring that they knew how to use them well, even when we weren’t present. Once, one of them even paid $150 for snacks, another printed flyers to spread the word,” explains program coordinator Stacy Lorne.

In Detroit, the results of the pilot program have been encouraging: 80 children worked with instructors during the summer, more than 100 books were distributed, of which certain were adapted for young adults with illiteracy. But what’s left to do today? The antenna Parkman of the municipal library of Detroit continues to offer regular workshops within the laundromat Coinless. Another local partner, Brilliant Detroit, was also committed to start four new laundromats, inspired by the initial success of the program, which doesn’t stop developing in the country.

For Allister to conclude, “Next summer, four laundromats in the Midwest will benefit from the KoomBook and its content, thanks to the Minnesota Department of Education. April 8 will be a ‘Free Laundry Day’ in a laundromat in Maryland, where families will be able to come wash their laundry for free and benefit from activities. Lastly, in Pennsylvania, in partnership with the association of the library of Comte Allegheny, libraries will be installed in three extra laundromats.

At completion, we would like to take this program national, so that laundromats in the country can become cultural spaces where everyone can look for what he or she needs: accompaniment, assistance and information. This couldn’t be possible without our partners, especially the laundromat employees, in direct contact with families. These are the first steps, but they are very important.” 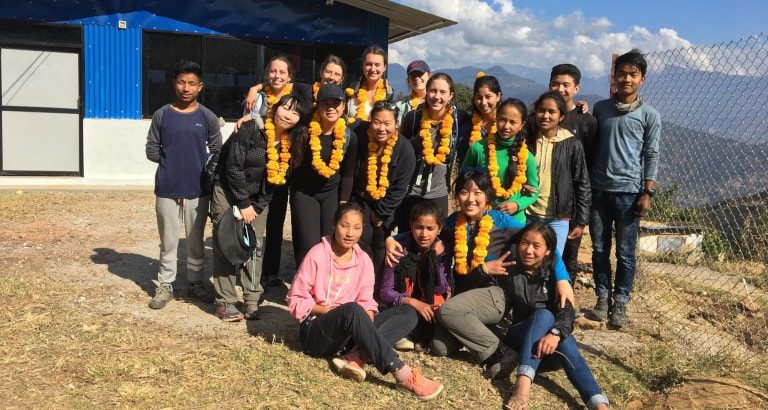 In Nepal, a Library Fights Against Human Trafficking