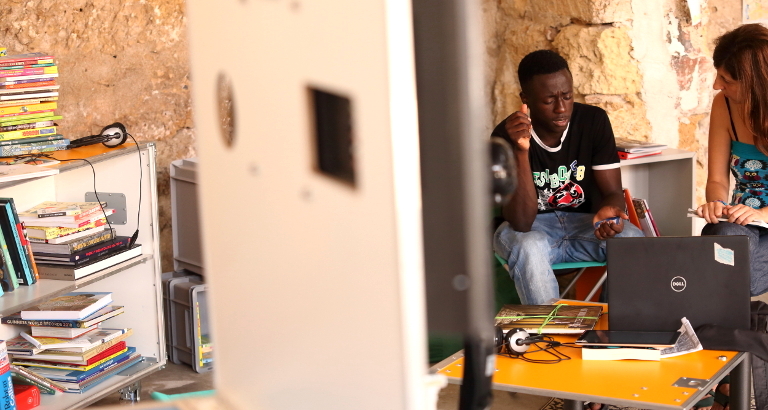 Ansou in Palermo: “When someone helps you, you want to thank him in return”

“They are not victims. They crossed a continent on foot, speak five or six languages,
have very strong projects, are full of resources. It’s very rare in Europe,
18 year olds who are also determined, motivated and forward-looking …”
Alessandra Sciurba

Ansou is only nineteen years old. Young and already old. Last September, he run aground in Sicily, alone. Very quickly, Italian lessons, meetings and the library. In the shade of a pine tree, against a stone wall, he tells the essential role of the Ideas Box in its integration in Palermo.

“Very few Sicilians see us as thieves, drug sellers or prostitutes. We’re lucky, I know it’s not the same everywhere in Europe, starting with Italy. When you arrive in a foreign country, language is the first thing you have to learn. It allows you to integrate, to find a job. In Palermo, if you do not speak Italian, it’s very difficult. And above all, you have to study. To be able to communicate with the inhabitants, to know the region, the culture and the city where you are.”

In March 2018, Libraries Without Borders set up its first Ideas Box in Sicily, in partnership with the Ministry of Culture and the Palermo City Council. The goal? Work with different local actors to promote the integration of young exiles; digital tools, board games and selected Ideas Box books allow you to learn Italian or write cover letters for example. Four months later, she gathers every day about twenty young migrants, mainly Guineans, Gambians and Burkinabe. And projects are multiplying : workshop on representations of migrants in the European press, production of a short film and production of a tourist map of Palermo.

Led by a team of Libraries Without Borders – Federica, Silvia, Ousman and Chiara – the Ideas Box is located in the heart of the rehabilitated brownfield Cantieri Culturali della Ziza, where are among others present the French Institute, the Goethe Institute, the Academy of Fine Arts and the only public cinema in the city.

“I met my friend Ousman playing football, not long after I arrived in Palermo. Since April, he has been a mediator at the library : it is thanks to him that I am here. I remember my first day here, I was calm. I observed a lot. One day, two days then three. I come now every day, I invest in every activity : if I’m not here, it’s because I’m sick.

Since I go to this library, I have improved my Italian. Many do not believe me when I tell them that I have been in Palermo for only ten months. Some of my friends have been here for two years and speak less well than me. Most of them make more than one hour of bus to come. I also learned to use a computer. I knew of course how to go on YouTube but I did not know how to write a text.

I have seen libraries in Palermo, but this one is unique. Above all because it is for everyone : it is not only for Italians, young people or migrants. And above all, it’s up to you to choose what you want to do. Nobody will force your hand. This library is a bit like life : sometimes you want to learn and work, sometimes you just want to laugh with your friends.”

“This library helped me a lot. Thanks to her, I created new relationships that I never thought I had. It’s an open place that makes no difference. We are all equal here : Gambians, Guineans, Ivorians, Senegalese, Cameroonians, Nigerians, Malians … When we play together, there are no more nationalities !

In Senegal, libraries are so different. Already, there is not all this equipment, like computers. And then if you borrow a book, you have to pay. Here it’s free. I would like to have this kind of library in my country. So many people want to study but do not have the opportunity. These libraries should be opened everywhere.

I stopped school when I was 12 years old. Today, I just want to study to be a cultural mediator, and why not work with you. I would like to make life easier for people, to convince them to come to the library to learn, to please them. To arouse their curiosity, their interest. You helped me do a lot of things. And when someone helps you, you want to thank him in return.”

Sicily, the gateway to Italy, concentrates 62% of exiled arrivals in the country even though it has an unemployment rate of nearly 60% among young people. With the Dublin agreements, the restoration of border controls and the end of the relocation program, thousands of exiles are now stuck in Italy.

What Leoluca Orlando, Mayor of Palermo, despite the firm and populist line of the Italian Interior Minister Matteo Salvini, tirelessly opposes a speech of solidarity. Two weeks ago again, in the journal Society, he testified: “If you ask me how many migrants there are in the city of Palermo, I will not answer you 80 000. Rather than there is has not. There is no distinction between the Palermitans who were born here and the Palermitans who arrived after their birth. […] With the presence of these new inhabitants, Palermo looks again to what it was at the beginning of the 10th century, at the peak of its glory, a time when we could hear all the languages ​​of the world on the markets of the world. center. This is again possible.”