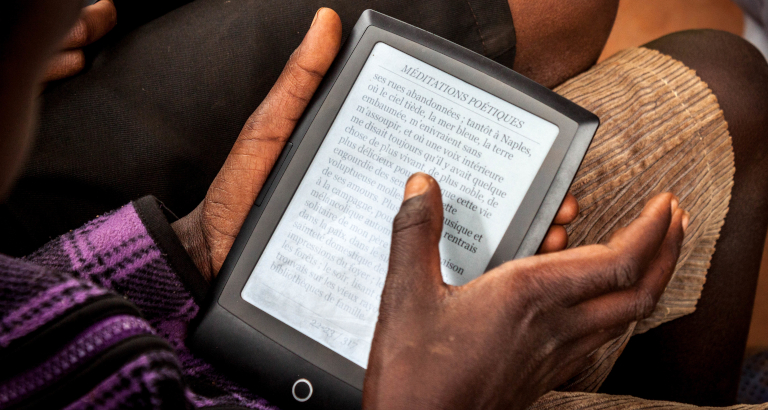 Two years ago when we first met Nazar, he had just received his French residence permit for 10 years. After having escaped the conflicts in Sudan, Nazar lived in the emergency shelter of Ivry-Sur-Seine, managed by the association ‘Aurore’, in which an Ideas Box has been put in place and run by our team for the past three years. One afternoon, the 27 year old Sudanese was using one of the tablets provided by the Ideas Box to look up a soccer club near the city center for which he can sign up and start playing in September. He told us about how he left Darfur in 2014 and about how he wanted to learn French in order to continue his studies. Two years later, Nazar tells us about his day-to-day life in France and how the Ideas Box has facilitated his integration…

“I had started to live a life without dreaming of a real life and a successful future. All I ever thought of was working and sleeping.”

In Sudan, Nazar studied engineering. Originally from Darfur, he attended the University of Khartoum until 2010, when he was forced to stop his studies due to the situation of the country and the violence that unfolded between the militias supported by the government and the rebel movements. In 2014, trapped by the increasing number of manifestations, Nazar decided to escape to Libya, before taking a boat to Italy.

“I didn’t know anybody. All I had were my own fingerprints. I had no idea how to leave, and I had no money. Eventually, I found a group of people who were headed back to France; I left with them.”

Nazar first arrived at the refugee camps in Calais. Then he made his way to Paris where he quickly found a room in the Pierre Semard emergency shelter of Ivry-Sur-Seine, where 250 migrants, refugees and asylum seekers – predominantly Afghani, Sudanese, and Eritrean – live.

“I didn’t know how to speak French. At first, it was very difficult – even simple, everyday tasks became complicated. I eventually took up French classes so that I could continue studying the same subject I had been studying in the university at Sudan: engineering. However, it was more complicated to do so in an entirely different language.”

At the first floor of the emergency shelter: an Ideas Box, a multimedia library that our team managed every day –with the help of civic services provided by Unis-Cité of Aurora– in order to facilitate the integration of young exiles. Among many of the activities provided by the Ideas Box were: French language courses, workshops on women’s rights, chess games made from clay, interactive maps of Paris, serigraphy, and board games. Dozens of young refugees met up every day at the Ideas Box to exchange ideas, play, strengthen their knowledge in regards to tools that give them access to rights, to housing and to health, browse the internet, read, or simply relax. Determined to learn French, Nazar quickly became the most regular user of the multimedia library.

“Books helped me learn more about the french culture and about my new environment. I would go every day to play cards, discuss, and take part in the activities that were offered. Sometimes I would even lead some of the activities with other mediators. I tried to make myself useful with translations. Most importantly, the Ideas Box helped me make new friends.”

Nazar continues to make new friends at the soccer club “la Camillienne”, which he has been part of since last September and which reminds him of Sudan, where he played competitively in the Sudanese league. He now lives in Drancy, at Seine-Saint-Denis, and continues to take French language courses every week.

“Playing soccer allows me to have a real life, outside that one of a refugee. Being so involved with this new soccer team has significantly impacted me. It is not only a way of meeting people from all over the world –Japan, China, Brazil, France– and practicing my french, but also a means of getting a real sense of community.”

Valuable member of the team, Nazar trains young kids in soccer, and also participates in multiple sports activities with the Kabubu Association.

“Today, everything is going well: I am playing soccer, I am going to school in order to become a translator in French, Arabic and English, and soon I will be looking for a job like everybody else. I am finally happy. Even though I do wish to one day return to Sudan to see my family, I nonetheless hope to build my future in France, not as a refugee, but as a french citizen and soccer player.”

At the refugee centers of Pierre Semard in Ivry-Sur-Seine, and of Jules Siegfried in Nanterre, the Ideas Box facilitates the integration of residents, asylum seekers and refugees, families, and remote populations. Thanks to the collaborative work of Bibliothèques Sans Frontières, of the Aurore association, of multimedia libraries, and of local organizations, each Ideas Box offers a set of resources that greatly help with this integration. A team of dedicated animators also offers creative and educational workshops that facilitate the learning of the host country’s language and also allow them to better understand its culture.