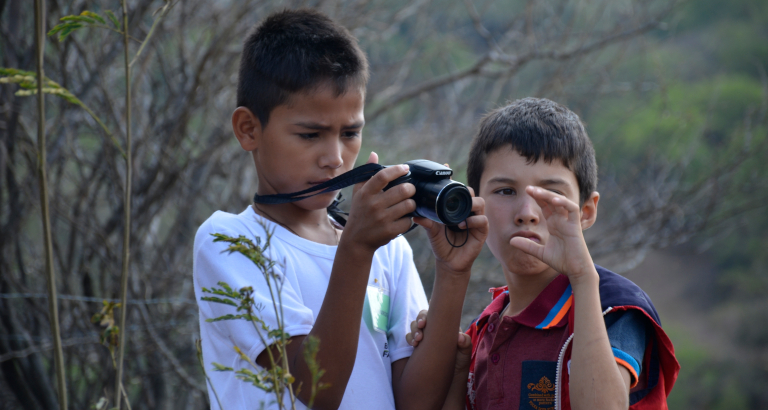 Since January 23th, Venezuela has two Presidents: one elected, Nicolás Maduro, the other self-proclaimed and president of the National Assembly, Juan Guaidó. An unprecedented political situation, with an economic, social and humanitarian crisis. Colombia was, at once, the richest country in Latin America. Nowadays, the country fell. Since 2015, hit by inflation and daily violence, more than four million Venezuelans have left the country toward countries like Colombia, which hosts more than one third.

In Arauca, where an Ideas Box has recently been installed, Bibliothèques Sans Frontières and Save the Children accompany dozens of Venezuelan children and adolescents every week. We meet with several actors of the project. The opportunity for a return on our various actions in Colombia.

According to the UN High Commissioner for Refugees, 3000 to 5000 Venezuelans leave the country every day. Why? Falling oil revenues, the country’s main resource, shortages of water and gas, hyperinflation, political stalemate and violence of protests, as well as the lack of food and care. What do they carry in their bag? Hope for a better life, especially in border countries of Latin America, like Colombia.

“With Save the Children, we are in the front line, directly at the border, among the first persons that Venezuelan refugees see when they cross it. As in most of our projects, we are not only working on social cohesion, but also on the cohabitation between the refugee population of the Arauca region, its inhabitants as well as the displaced people due to the civil war in Colombia.”   explains Inti Fernandez, former coordinator of the project.

A few months ago, Jenny Salcedo, Project Manager at Biblothèques Sans Frontières, traveled to the border between Colombia and Venezuela to talk with children and refugees from Arauca and gather their needs. They have shown great interest in arts and crafts, movies and board games. During a series of discussions with community members, many parents also expressed concerns about their children’s school learning. Since then, we have selected custom educational resources – physical and digital – for different populations using the Ideas Box, according to their needs and specificities: 300 books of children’s and international literature, board games, e-books, applications or movies.

“The  Espaciosamigables  are common spaces where everyone can enter without having to declare their origin, ethnicity, gender, nationality or political affiliation: everyone can access it without any restriction. These are spaces where people read, play and share their life experiences.” says Jenny.

Three years ago, in Colombia, in partnership with the National Library of Colombia, twenty Ideas Boxes were also set up by Bibliothèques Sans Frontières in demobilization and transition zones, where the Revolutionary Armed Forces of Colombia, the FARCs, have today laid down their weapons to reintegrate civil society. This project took place after the peace agreement signed in 2016 between the government of President Juan Manuel Santos – Nobel Peace Prize winner – and the veterans, putting an end to half a century of civil war that had lasted more than six years, 9 million displaced, 270,000 dead and 61,000 missing. By creating meeting spaces, these libraries helped to initiate the peace process by encouraging exchanges and restoring trust between affected communities.

In 2018, the twenty Ideas Box were transferred to the municipalities; today they are led by community librarians, who have been trained by our team and staff at the National Library of Colombia. Walter, a member of the Group of Friends of the Santa Maria Library, tells us:

“The Santa Maria Library has created and recreated trust between people. Since its opening, we have seen impressive changes, especially with children. The seeds we planted at home have paid off! For them, it is a second home and the librarian, a second mother.   “

An external evaluation of the project has since been carried out: it emphasizes the strong involvement of communities in the management of libraries and associated cultural events, the restoration of trust between residents and the peaceful resolution of various conflicts. Also, the leadership and empowerment index for library users is 31% higher than for people who do not have access to these services.

Despite this peace agreement, however, some Colombian departments are still the scene of armed conflict. This is particularly the case of the department of Norte Santander, main bastion of the Ejército de Liberación Nacional, second guerilla of the country. The families displaced by the conflict are regrouping in some districts of Cúcuta, resulting in a chronic insufficiency of the services of the State, in particular in the matter of access to education where the migratory crisis only aggravate an already precarious situation. Children are particularly vulnerable: targets of armed factions for their recruitment, increase in traffic and delinquency.

That’s why we recently installed Ideas Cube – digital libraries that bring the Internet to disconnected areas – in the suburbs of Cúcuta on the Venezuelan border, to improve access to education for minors in vulnerable situations. Special attention is given to women and young girls, whose risk of prostitution is high.

In partnership with the association Fundación Creciendo Unidos, we selected and shared digital resources for several schools in the city, such as the Rafael Uribe College Uribe , addressing the literature and history of Colombia, as well as videos and recreational exercises . Yvan Clairet, head of the Contents section at Bibliothèques Sans Frontières, legal representative of the association in Colombia and former head of mission, remembers his stay in Cúcuta, punctuated by numerous exchanges with young people from the local community of Colombia Uno:

“I was deeply touched by people’s energy and faith in the future. I do not know the displaced people or migrants of Arauca, but those in Cucuta have a very strong entrepreneurial spirit – they have a lot of expectations and a lot of energy. They have not been completely destroyed by the migration crisis. On the contrary! they look to the future, full of imagination and creativity!”

For the last 12 years, Bibliothèques Sans Frontières has been working to bring knowledge to the furthest people around the world. Because inequalities in access to information are at the heart of the biggest injustices today, we work in 50 countries to give everyone the ability to be independent and thrive through open and free access to education.