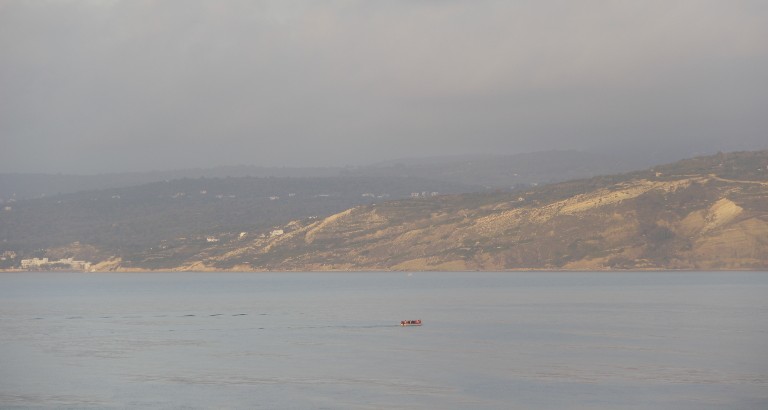 After the March 20th agreement between the European Union and Turkey, the majority of the large humanitarian organizations withdrew from the Moria Camp in Lesbos, Greece. Opposing the increasing number of violations of the Universal Rights of Man, many NGOs called attention to the laws concerning the retention and incarceration of refugee populations.

Since March 20th, more than 5,000 refugees are trapped in the Moria camp, now transformed into an open-roof prison. Risking their own lives, the refugees are now seeking to register themselves as asylums and to avoid returning to Turkey. At the present time, the refugees do not have permission to leave the island. Besides the aid provided by religious organizations, the inhabitants of the Moria Camp receive insufficient support.

A couple of weeks ago, I visited the Moria camp, with our partners and friends from Save the Children. Together, we work at the community center for unaccompanied minors, which is also located in the enclosed camp. Calling this a community center would be a questionable understatement. This camp clearly resembles a prison with its high fences, closed gates, and guarded entrances. Inside of the camp, hundreds of children are waiting. They come from Afghanistan, Pakistan, Syria, Morocco, and Central Africa. Some of them have been here for several months.

During my last visit in November, the center temporarily housed these children before sending them to shelters on the mainland. But, with the increasingly pressing refugee crisis and lack of a housing solution, the temporary soon became more permanent. Yet, the worst aspect of this situation is definitely the fact that the children receive little to no information about how much time they will spend in the shelter. These children are stressed, depressed; some are traumatized by what they left behind. Europe, a land that they have dreamed of, cannot give clear and rapid solutions to their problems.

Last month, With Save the Children, BSF deployed an Ideas Box in this center. At BSF, the internal debate about our presence in the camp continues to rage on. Does our presence legitimize European political machines and the agreement with Turkey? To be manipulated by politicians and the political system? These questions are justified. Still, I think that our presence in the center, with the Ideas Box program, is necessary because it serves children, the most vulnerable group arriving in Greece today. Protecting them, offering them cultural and educational activities, digital resources, and social structures to relearn the rules, all the while creating their own space, are all dimensions that we consider top priority. It is our mandate to bring solutions and access to information to the most vulnerable people, particularly children.

At Moria and elsewhere, partners and users of the Ideas Box construct and constantly update content and activities. This goes with the freedom of expression that is inherent in the Ideas Box and the possibility given to children to create their own content to share.

Our intervention raises numerous questions about our practices and our mandate. However, these questions do not prevent us from supporting and sustaining the positions taken by organizations such as the NGO Doctors Without Borders, The UN High Commissioner for Refugees, or The French Office of Foreigners and Stateless Persons after their withdrawal from Moria.

But for the time being we have made the choice to stay with the children of Lesbos. This is a position that is subject to change, but for at least the next several months, we will remain there. This is also a position that gives us an important responsibility: to report and raise awareness about what is happening in order to create change.

This is the seventh article in an ongoing series of blog entries written by LWB staff in Greece that have appeared in the French newspaper Libération.