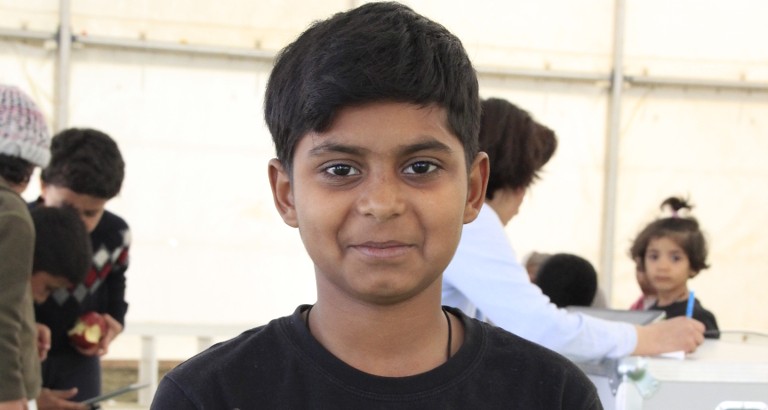 Ali is 12 years old. He has already crossed ten countries and had more difficulties than any European traveler would have to face. He crossed these countries “illegally,” without receiving any stamps on his passport to proudly show to his friends.

Ali is from Pakistan. He is traveling with his uncle, aunt, brother, and sister. His father left Pakistan more than two years ago. During these two years his children haven’t seen him. It is for this reason that Ali is so impatient to get to Germany. The days at the Eleonas Refugee Camp are long and idle. Ali lives in a constant state of waiting to be able to continue his journey.

He misses his school and his life in Pakistan. After a month of waiting at the camp, Ali and his family were “selected” to be placed in a “hotel.” So, we must say good-bye to this bright young boy, who, displaying an unwavering willingness and enthusiasm, was always willing to participate in the activities organized in the Ideas Box.

We learned later that the place Ali and his family were sent was far from a hotel, but rather another refugee camp. “Not really a hotel, more like a summer camp. A bit far away, but it’s better than here,” a camp manager at Eleonas explained to us. In this new setting however, the problem is the same: Ali thinks only of reuniting with his father and cannot build a future for himself. Being out of school for several months, and without a house to stay in, Ali is losing precious time during a crucial period in his life.

Two weeks later, a message from an unknown German number appeared on the screen of my cell phone. It was Ali. “I’m in Germany!” he exclaimed happily. It was then that I learned that Ali had been able to find his father in Germany, after two years of separation. After pushing the limits of human boundaries, Ali and his family are once again united.

“I’m in Germany!:” how many people, whose journeys are long and filled with obstacles, dream of exclaiming these same words? I think that I too, will shout “I’m in Germany!” during my next trip to Frankfort, thinking not only about Ali but of everyone who is stuck in transit, dreaming of reaching their country of choice.

This is the fourth article in an ongoing series of blog articles written by LWB staff in Greece that have appeared in the French newspaper Libération.