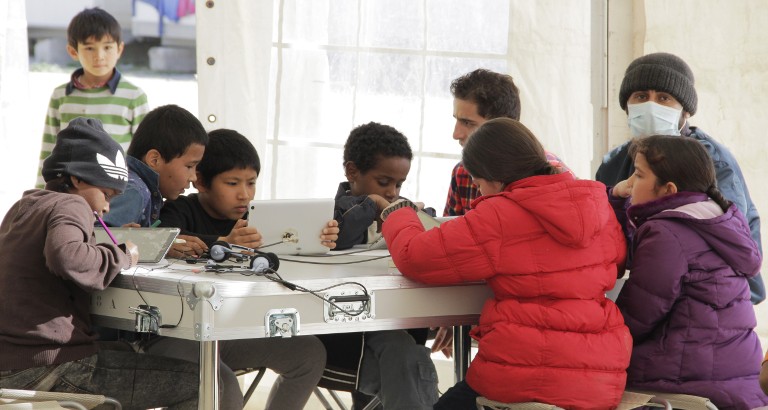 Last March, when we arrived at the Eleonas refugee camp in Athens with the Ideas Box, one man got involved in the maintenance and use of the portable multi-media toolkit immediately and wholeheartedly. His name was Walter.

A a 37 year old Ugandan computer engineer, Walter was forced to flee his country and leave behind his wife and 8 year-old daughter in 2014 because of his political views. From Uganda to Greece, his journey has been more than a little chaotic. He spent several months in Turkey after being taken prisoner by the coast guard for several days. He remembers little of his voyage to Greece: he woke up in a hospital in Lesbos after succumbing to hypothermia. He was almost immediately sent to the camp in Eleonas, where he has been waiting to begin the asylum-seeking process since January 2016.

While deploying the Ideas Box at the Eleonas camp for the first time, Walter shared his passion for new technologies with us. First, he spent some time on the available computers in the Ideas Box. This was a way for him to reconnect with his country and his family, since he lost all of his belongings, including his computer, while traveling to Greece.

Motivated and filled with ideas, Walter quickly became interested in becoming involved more directly in the activities offered by the Ideas Box and wanted to share his knowledge of information technology with others living in the Eleonas camp. He was thus able to get back in touch with his vocation and instill a sense of activity and creativity into the everyday routine of the camp; a routine that is all too often marked by endless waiting and boredom. Comfortable with the tools made available by the Ideas box, and always ready to share his knowledge, Walter has helped immensely in keeping the activities running smoothly.

Walter has also been able to break down the barriers to communication that normally hamper migrants and to help establish ties between individuals from all over the world, from Syria to Afghanistan. By using technology to facilitate exchanges between people who share in his condition but not necessarily his origins, Walter has expanded his own horizons as well.